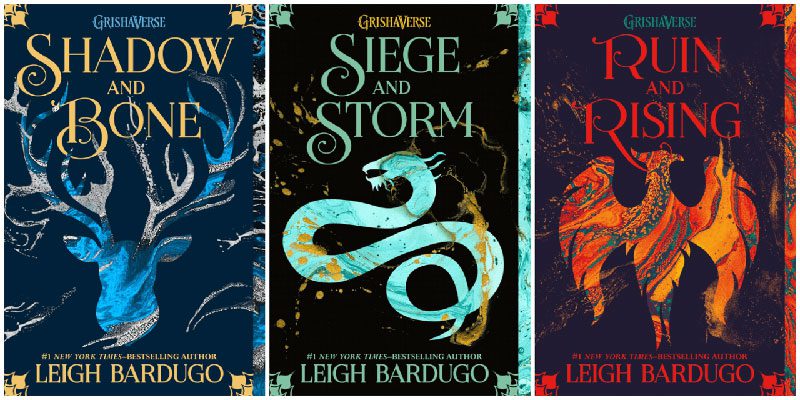 Last week, Netflix started streaming Shadow and Bone, their highly anticipated adaptation of Leigh Bardugo’s Grishaverse books. Want books like the series, but you’ve already read (or don’t want to read) the books? Not a problem! These novels have all the intrigue, and some of the length, of the Grishaverse.

Wanna read the series? We’ve got you covered!


And check out these readalikes


An Ember in the Ashes by Sabaa Tahir

Description: Laia is a Scholar living under the iron-fisted rule of the Martial Empire. When her brother is arrested for treason, Laia goes undercover as a slave at the empire’s greatest military academy in exchange for assistance from rebel Scholars who claim that they will help to save her brother from execution.

Strange the Dreamer by Laini Taylor

Why you should try it: Though much shorter than the Grishaverse series, Taylor’s writing is just as complex, and the story just as compelling and full of twists and turns.

Description: War orphan and junior librarian Lazlo Strange gets an unexpected opportunity to follow his dream of seeking the mythic lost city of Weep with the Godslayer and his band of legendary warriors

Silver Phoenix: Beyond the Kingdom of Xia by Cindy Pon

Why you should try it: Parents don’t feature at all in the Grishaverse, but in Pon’s novel, a missing parent is the catalyst for all the action. It’s a classic quest novel with evil demons, flying chariots, and really good food.

Description: With her father long overdue from his journey and a lecherous merchant blackmailing her into marriage, seventeen-year-old Ai Ling becomes aware of a strange power within her as she goes in search of her parent.

The Priory of the Orange Tree by Samantha Shannon

Why you should try it: Shannon has packed dragons, court intrigue, secret societies, and a love story into one nearly 900-page epic fantasy novel.

Description: A queen who would survive assassination attempts to continue her ruling line is protected with forbidden magic by a court outsider, while a secret society works to prevent a dragon war.

Why you should try it: Like the expansive Grishaverse, Carey’s Kushiel’s Legacy series spans nine novels. Unlike Bardugo’s novels, this series is steamy and heavy on the interplay of court politics, spycraft, and secrecy.

Description: Sold into indentured servitude at the exotic Night Court as a child, Phèdre nó Delaunay, faces a difficult choice between honor and duty as she deals with a world of glittering luxury, conspiracy, sacrifice, and betrayal and plays a key role in protecting her land from a dangerously clever and evil villainess.

The Queens of Innis Lear by Tessa Gratton

Why you should try it: It’s all about who is going to inherit the kingdom, in this medieval fantasy of sisters jostling for position while their father goes mad.

Description: An epic adult fantasy inspired by Shakespeare’s King Lear depicts a once-bountiful isle decimated by a prophecy-obsessed king’s erratic decisions, where three rival princesses use respective approaches to prepare for a war that will determine their realm’s leadership and survival.

Dontaná is a Collection Management Librarian who was born with an unending reading list. She is almost always reading two books simultaneously and is easily distracted by cool covers.