May 30: All library buildings closed for Memorial Day. More » 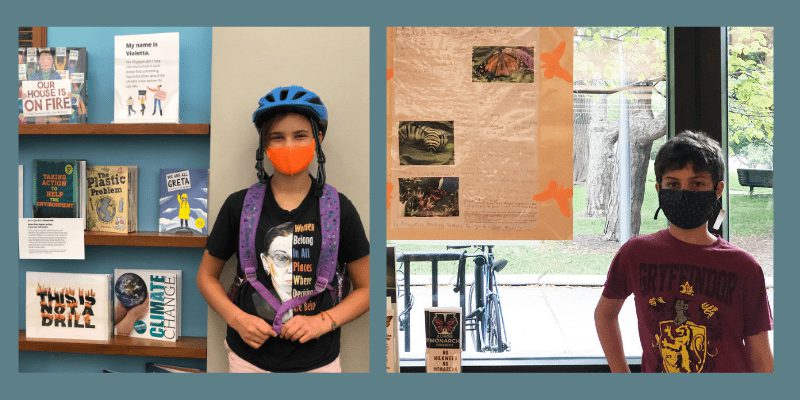 Two local students who care deeply about the environment and the climate crisis are spreading the word at the Main Library.

Benjamin, age 12, created a poster all about monarchs, including why their population is in decline and how people can help. See it on the eastern windows in the Children’s Services Area on the Main Library’s first floor.

Violetta, age 10, inspired and contributed to a display about the climate crisis, with books to check out. Find the display in the Main Library Children’s Services Area, on the western wall.

Benjamin: ‘I became someone who would like to be an environmental activist’

Benjamin is 12 years old and in seventh grade at Brooks Middle School. He’s on the Brooks Environmental Action Team (BEAT), which drove the effort to make 2021 the Year of the Butterfly in Oak Park.

By participating, Benjamin says, he “became fascinated by monarchs.”

But even before that, “I’ve been interested in protecting the environment for a while,” he says.

“I was in the Museum of Science and Industry and there was an exhibit on glaciers and global warming. I watched a video about global warming and I thought it was really important, and became someone who would like to be an environmental activist.”

Brooks science teacher Laura Stamp says, “I admire his passion and interest in all of these subjects and am so glad he’s a part of the BEAT!”

Violetta: ‘I love the environment … something has to be done’

Violetta is 10 years old and in fifth grade at Mann Elementary.

Middle School Librarian Beronica Puhr says Violetta is passionate about climate change and wanted her signage to be displayed in the library for the community to see.

“I love the environment and I know that something has to be done about the climate crisis before it’s too late,” Violetta says in a poster on display.

Fun facts about Violetta: She’s currently reading The Lord of the Rings, she made a club called the Oak Park Animal Club with her friends, and she’s a Hufflepuff!

Violetta recommends checking out the youth activism groups Fridays For Future and March For Our Lives.

Find the titles in the library’s catalog

Want to make a difference in your community?

Join the Teen Environmental Club for their monthly Adopt-a-Block cleanup!

All teens are welcome to join.

This program is led by the Leading Edge Teen Advisory Board, where teens gain leadership skills and work together to build community.

Students can submit their short films to the 2022 Young Filmmakers Contest. It's part of the One Earth Film Festival, the Midwest's largest environmental film festival!

It's free to enter, and all winning films will be screened at the One Earth Film Festival in March 2022. See 2021 winners.

Students in grade 3 up through age 25 must submit their films by January 5, 2022. Get inspired by watching the short video below, and see all 2022 Young Filmmakers Contest details.