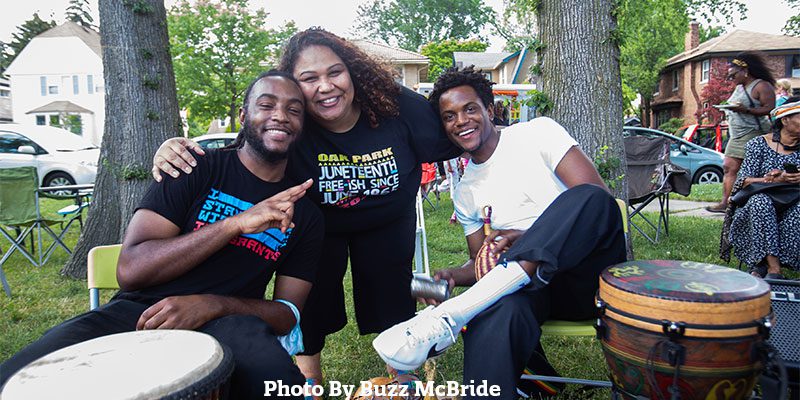 On Sunday, June 19, all library locations will be closed for Juneteenth. This national, state, and Oak Park holiday celebrates African Americans’ freedom from enslavement in the United States.

Look for Oak Park’s Book Bike and library staff marching in the Oak Park Juneteenth parade, organized by community members and co-sponsored by the Village of Oak Park.

Artist Reception for Tia Etu, Saturday, June 18, 1–3 pm, Main Library Idea Box. Local artist Tia Etu will unveil a new Juneteenth-inspired artwork, The Call, commissioned for the library’s permanent art collection. The exhibit runs through the end of June and will include a range of other artwork by Etu, which captures social inequities in powerful and unique ways.

Juneteenth Ceremony, Monday, June 13, 11:30-12:30 pm, River Forest Public Library, River Forest
The Village of River Forest will honor the Juneteenth holiday with a flag-raising ceremony and community social event. Refreshments from Addis Café will be provided. Free and open to the public.

Juneteenth, which celebrates the end of slavery in the United States, is now a federal, state, and Oak Park village holiday. It commemorates June 19, 1865, the day when a U.S. Army general in Galveston, Texas, read orders that all enslaved people were free–two and a half years after the Emancipation Proclamation had formally freed them.

The locally produced documentary Hope of Juneteenth celebrates the history and joy of Juneteenth, and the promise of hope for the future it brings. The documentary, which our Multicultural Learning Coordinator Juanta Griffin helped make, was directed and produced by Forest Park community leader Marjorie Adam, funded by Riveredge Hospital, and supported by Forest Park Mayor Rory Hoskins.

“How we Juneteenth” & “Juneteenth Jamboree”

Check out digital titles for Juneteenth available on Hoopla »