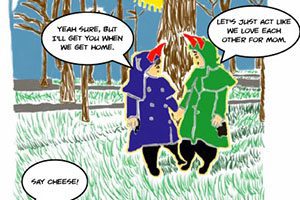 See all student work here and by searching Twitter with #HackingHemingway

Inspired by old Hemingway family photos digitized earlier this year through a state grant to the library, Oak Park tweens and teens showed “a burst of creativity” in their classrooms and at the library this spring, said the grant’s Digital Learning Resident Alex Nall.

A quarter of the middle schoolers in Oak Park Elementary School District 97 got involved with the library’s Hacking Hemingway digital initiative, which provided students and teachers with access to never-before-digitized Hemingway artifacts from the archives of The Ernest Hemingway Foundation of Oak Park and the library.

The initiative’s goal was to transform students and teachers into digital creators using the artifacts—especially photographs of young Ernest and his older sister Marcelline—now available online in the Illinois Digital Archives.

“We wanted them to see that the Hemingways were real people who lived in Oak Park, and Ernest and Marcelline Hemingway were kids growing up here just like them,” Nall said. “Before Ernest was a famous author traveling the world, there was this whole other world he was immersed in—the world they’re living in right now.”

Looking at yesterday and today

“We asked the students to use the digitized artifacts as jumping-off points,” Nall said. “How has Oak Park changed in the past 100 years? How do their lives relate?”

In response, art students created digital comics that were built on photographs of young Ernest and his family and friends. Inspired by his choppy prose style, students penned Hemingway-esque six-word stories that will be published this July in an anthology titled In Your Time and added to the library’s Oak Park Creates collection. The student work also will be presented this July at the International Hemingway Society conference in Oak Park.

‘A stronger understanding of self’

Although the famous six-word tale, “For sale: baby shoes, never worn,” has been falsely attributed to Hemingway, this short story epitomizes his writing style—short, choppy, and direct. At Brooks and Julian, students were asked to use this style to talk about their community and their own lives in six words.

Feierberg, the IB Coordinator at Brooks, said the six-word memoir project encouraged her students to think critically and be creative but, most importantly, to reflect.

“Establishing a strong sense of self is critical at the middle-school age,” she said. “I witnessed students look back on their life experiences and prioritize their beliefs by asking themselves, ‘What is important to me?’ Similar to how Hemingway used reflection, our students were able gain creativity, wisdom, and a stronger understanding of self.”

“I look forward to the day when we celebrate the new writers, novelists, and journalists that this project has inspired,” Feierberg said.

Her own six-word memoir? “Setting tomorrow’s world on fire today.”

Seeing Hemingway in ‘a new light’

Then, to transform the archival images into works of their own, they used iPad apps SketchBook Pro and Book Creator to add speech balloons and graphic flourishes, along with their own insights and humor.

“When I did this project, I thought about my family and I,” one student reflected. “The Hemingway family has three kids, and my family does too. … I learned that everyone can look at the same picture and see something new. For example, a classmate used the same picture and made her comic completely different. I think that people can look at my cartoon and see Ernest Hemingway in a new light.”

Edward Magierski, teacher of Art Foundations and Fine Art at Julian, said his students got a kick out of hacking the literary giant in the classroom. “Being let loose to draw over, erase, and place in fantastical situations these old pictures made for laughter and sharing in the art room,” he said. “The creative output with the digital tools is astounding and instantly gratifying.”

‘We got to express our creativity’

At the library in May, 15 kids in grades 5-8 participated in a MinecraftEdu class that had them tackling challenges inspired by Hemingway and Oak Park—for example, navigating a maze through a recreation of Oak Park and River Forest High School, pheasant hunting with Ernest’s grandpa, and catching fish at Walloon Lake, a Hemingway family vacation spot in northern Michigan.

Students also built their own structures within the game, which ranged from treehouses and apartment buildings to a giant computer that actually functioned as a working computer within the game.

“I enjoyed this game because I was able to play with many people and use different technology,” one player said. “It was educational and well made.” Another participant liked that “we got to express our creativity.”

‘A love note to Oak Park’s past’

Opportunities for all to get involved with Hacking Hemingway continue through this summer’s Idea Box installation, A Walk in Hemingway’s Oak Park.

This June and July, step inside the Main Library’s Idea Box and take a walk back to Oak Park in 1906, when 7-year-old Ernest Hemingway is just beginning to discover the village he and his sister Marcelline live in. Once inside, you can interact with the installation and transform it with your own creativity.

With help from the library’s drop-in teen volunteers, the library recreated three landmark buildings: the Hemingway Birthplace Home, the Hemingway Boyhood Home, and the Scoville Institute—Oak Park’s first public library, where Ernest and Marcelline spent many hours as children.

“This is an attempt to recreate Oak Park’s past by highlighting places that were significant and vital to Ernest and Marcelline Hemingway’s young lives,” Nall said. “We want people to learn about the history of these buildings and what they meant, and we also want people to have their own interactive experiences with each building.”

Inside, you can write a short story at Ernest’s desk in the Birthplace Home, take a selfie with Ernest and Marcelline on the porch of the Boyhood Home, and read short stories shared by others in your community at the Scoville Institute.

Nall said that each building was personal to young Ernest Hemingway and his family, and the installation is making them available in a new way: “as a condensed history lesson, a love note to Oak Park’s past, and a way to embrace the future.”