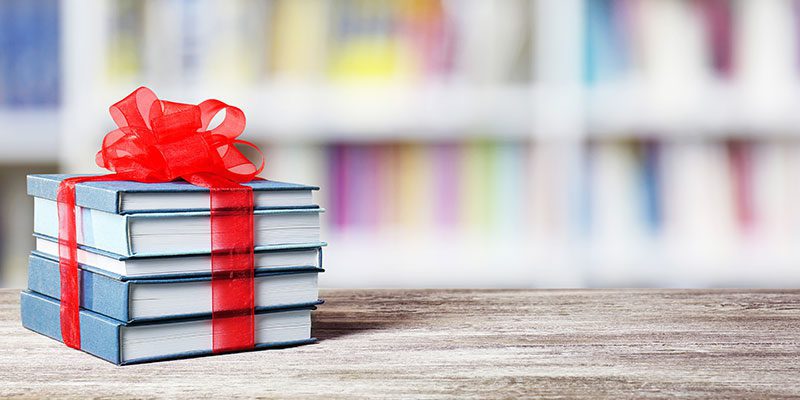 Looking for great gift ideas? Books and movies your librarians love? Check out a year of #OPSuggests here or by searching #OPSuggests on Facebook, Twitter, or Instagram.

16 of our most-loved titles to share this holiday season

Here are the titles you told us on social media that you loved most.

1. For your friend who needs to read the book before seeing the film

The Night Circus by Erin Morgenstern, suggested by Alex

“If you’re on hold for Erin Morgenstern’s newest title, be sure to read or listen to her previous hit, The Night Circus. It’s magical, without being silly. The audiobook’s narrator will be recognizable to fans of magic; Jim Dale also read the audiobooks for Harry Potter.”

“After an incident at a royal wedding causes international headlines, the first son of the US and the Prince of Wales are forced to pretend to be best friends to appease public relations. However, their fake friendship quickly grows into something much deeper that might possibly upend two nations. This sweet romantic comedy is my favorite book of the summer-incredibly charming, delightful, and lovable!”

3. For your relative who loves documentaries

“Documentaries often represent the best of what feature films attempt to do: tell a compelling story. Truth is stranger than fiction, the saying goes; in Dark Money, truth is more disturbing than fiction. Unrelated to the book of the same title, the topic does, however, parallel Jane Mayer’s deep dive into big anonymous money in politics. Director Kimberly Reed narrows the subject to focus on how the 2010 Citizens United v. FEC Supreme Court case impacted politics in Montana, a state that long ago adopted strict laws safeguarding political influence from corporations. The film is framed by journalist John Adams’s investigation into questionable direct-mail campaign ads targeting various candidates running for office. When the Great Falls Tribune closes its Montana bureau, Adams loses his job and hits the road with nothing more than his dog and whatever he can fit in the back of his truck. Armed only with his press contacts and a laptop, he begins self-publishing the non-profit shoe-string “Montana Free Press,” whose continued search for facts helps uncover campaign finance corruption in the Montana legislature—which was directly tied to dubious machinations of dark money organizations. The expose offered in Dark Money is essential viewing.”

4. For lovers of the ‘strange and spellbinding’

“I love this strange and spellbinding collection of linked stories that feature, in some way, a lock and its key. Reading like fairy tales turned on their heads, the stories center characters of diverse ethnic, gender, and sexual identities.”

5. For the bakers in your life

“Happy indeed! Cookies, cakes, pies, and tarts! This book includes a variety of recipes from the authors collection. The illustrations are fun and colorful. This cookbook makes me want to try and bake every recipe from the beginning to the end.”

6. For Game of Thrones fans

The Priory of the Orange Tree by Samantha Shannon, suggested by Jenna

“I generally prefer my books under 400 pages, but I was completely immersed in all 800+ pages of this epic fantasy. Dragons! Queens! Magic! It’s a truly magnificent book.”

7. For the kid who loves a good ghost story

“Pam Smy’s Thornhill will give everybody quite a spook! This book features two stories, one told through art and the other told in text. Smy illuminates readers with the message of how bullying can have a damaging (and lasting) effect on a person.”

8. For the person dreaming of early retirement

“A clear step-by-step guide to not just plan out an early retirement, semiretirement or a career intermission but really visualize the life you want and clarify your rationale and approach to finances.”

9. For your friend who loves all things sci-fi

The Tiger Flu by Larissa Lai, suggested by Barbara

“This is a highly imaginative novel that slowly draws you in with the alternating voices of Kora and Krilow. At its core the book is literary science fiction about two women surviving in a world decimated by climate change. The result is a surreal story that takes you on a wild, thought-provoking journey.”

10. For your relative who watches indie films

Growing Up Smith, suggested by Rashmi

“I laughed aloud while watching Growing Up Smith. It’s the feel-good, coming-of-age story of Smith, a 10-year-old boy from India. Smith’s family sometimes makes hilarious missteps in their attempts to reap the benefits of living in America while simultaneously striving to preserve their Indian heritage. In one memorable scene, Smith struggles with his parents imperfect assimilation of mainstream American culture when they send him to school with a yellow squash, instead of a pumpkin, to carve for Halloween. This film is set in the late 1970s.”

11. For readers who love ‘introspective and raw’

The Coldest Winter Ever by Sister Souljah, suggested by Vann

“Sister Souljah manages to embody the Black experience in a way that both draws you in and makes you squirm. It’s realistic down to the way the dialogue is punctuated, so even though it is fiction, you don’t get a break from reality. You face it head-on just like the titular character, who is as sassy as she is spoiled, but she learns, and she learns entirely through her pain. It’s a worthy read that will leave you introspective and raw, and it’s haunted me in the best way since I picked it up years ago.”

12. For your relative who loves a happy ending

Natalie Tan’s Book of Luck and Fortune by Roselle Lim, suggested by Jenna

“My favorite book of 2019 so far! It’s lovely and heartwarming and charming and magical. And it will definitely leave you hungry for dumplings.”

13. For your friend who needs a little magic in their life

Inner Witch: A Modern Guide to the Ancient Craft by Gabriela Herstik, suggested by Tatiana

“In these times when it can be easy to feel powerless and overwhelmed, this warmhearted, feminist book on how to bring more magic into your life is an appealing read. Gabriela Herstik, a good witch, covers topics ranging from astrology, fashion, herbs, and spells. Whether you fully believe or see it as entertainment, this is a fun primer on getting in touch with yourself and the otherworldly”

14. For a queer, anti-capitalist version of the Jack Sheppard story

Confessions of the Fox by Jordy Rosenberg, suggested by Andy

“Confessions of the Fox is a queer reimagining of the story of Jack Sheppard, famed London pickpocket, jailbreaker, and anti-bourgeois folk hero. The book is formatted as a biographical manuscript about Jack Sheppard in which he is a trans-man, accompanied by the footnotes of struggling professor Dr. Voth, who is also a trans-man. Should you trust the narrator? Should you trust the funders of this research project? Is this queer anti-capitalist version of the Jack Sheppard story the most or least authentic version yet? Find out!”

15. For kids who love a classic tale

“Looking for a classic kids series about the author’s life growing up in turn of the century Midwest that was and remains progressive on topics kids and teens still grapple with? I return to the Betsy-Tacy series for new reads almost every year, especially looking to Emily of Deep Valley when I need to muster my wits. I’ll never forget the day I visited the real life houses and sat on their friendship bench with my childhood copy of the first book.”

I’ll Be Gone in the Dark: One Woman’s Obsessive Search for the Golden State Killer by Michelle McNamara, suggested by Alex

“I’ll Be Gone in the Dark is a really, really dark true crime book. It’s very sad for that reason and because the author died suddenly, and the book was published posthumously. But it’s really well written, a page turner you can’t put down, and it has a strong Oak Park connection! The author grew up in Oak Park and went to OPRF High School, and one of the first chapters takes place in Oak Park when the author talks about how she first got interested in cold-cases because of an unsolved murder here in Oak Park in 1984.”

And 32 more titles we loved this year