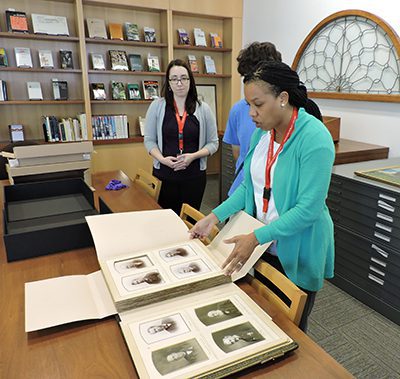 Last week, we welcomed home two of the oldest items in the library: a pair of Grand Army of the Republic (GAR) volumes containing around 100 photographs and a wealth of information about local veterans who fought in the Civil War.

“They’re a great time capsule of veterans from this time period,” said Leigh Tarullo, Curator of Special Collections. “You’ll see records and portraits of Cheneys, Hemingways, and other prominent Oak Park families like the Van Vliets.”

But as all things do with time, these large-format volumes had been decaying, to the point where the library could no longer allow visitors to handle them. Tarullo said she often would transcribe by hand many of the nearly 130 pages of calligraphed military service records and biographical information for those who were researching family, local, and Civil War history.

And although the photographs themselves were in great shape, Archivist Emily Reiher said, the leather cover was full of “red rot,” a reddish powdering and flaking of the leather as it degrades. “These volumes contain multiple formats, so there are different reactions happening,” Reiher said.

Now that the GAR volumes are back in the library, they’re available for genealogists, researchers, and local history buffs to view by appointment. “Now vistors can see and handle the actual physical items, and turn their pages,” Reiher said.

The conservation process has allowed the library to offer the same viewing experience that was intended when the books were created, Reiher said, as well as allow the library to more easily digitize the volumes in the future.

“They’re really works of art, and we want to preserve that,” she said.

More about the library’s Special Collections »