In 1939 Mr. and Mrs. Andrew Dole presented the building at Augusta Street and Cuyler Street to the Village of Oak Park to be used for “cultural and recreational purposes.” In 1940 the North Branch Library moved to its current location in the re-modeled, village-owned Dole building and became the Dole Branch Library.

The current building serving as the Dole Learning Center has a history of varied purposes and renovations. 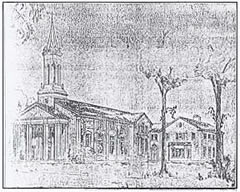 North Congregational Church
A prairie landmark which had been moved from Iowa Street in Oak Park in 1906 occupied the site when local architects Tallmadge and Watson designed a New England style church with a belfry and community house for the North Congregational Church. A more modest building was erected in 1926 around the already existing frame structure of the prairie landmark. The rapidly growing number of automobiles made transportation to larger central churches more convenient and the neighborhood church, North Congregational, closed less than a decade after construction.

Dole Learning Center
By 1939 the building had changed hands twice more. In May of 1940 the North Branch extension of the Oak Park Public Library (originally housed at Fair Oaks Pharmacy at Ridgeland and Chicago), finally moved to the re-modeled, re-conditioned Dole building.