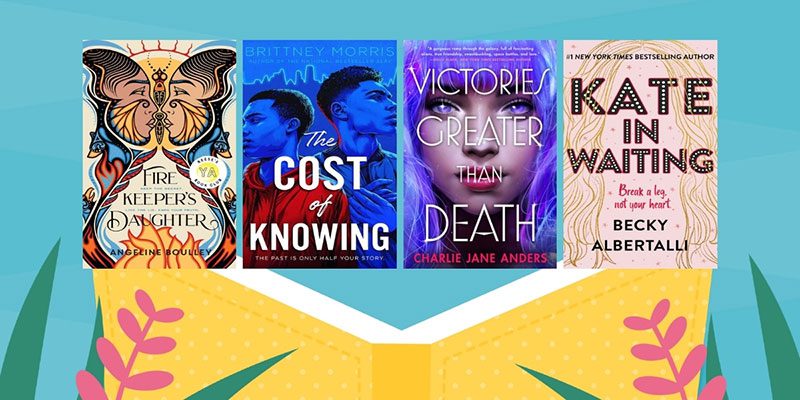 Spring is such an exciting time of year, and it’s also a great opportunity to crack open a new book while taking a break from that tedious spring cleaning!

With so much happening this year, a fresh new book might be exactly what the doctor ordered, and it also happens to be an extremely productive way to utilize your time if you find yourself stuck at home because of those pesky spring showers.

Below are just a few upcoming titles; copies are limited, so place your holds now!

New this spring for teens

Description: Eighteen-year-old Daunis’s mixed heritage has always made her feel like an outsider, both in her hometown and on the nearby Ojibwe reservation. When she witnesses a shocking murder, she reluctantly agrees to be part of a covert FBI operation into a series of drug-related deaths.

But the deceptions—and deaths—keep piling up and soon the threat strikes too close to home. Now Daunis must decide what it means to be a strong Anishinaabe kwe (Ojibwe woman) and how far she’ll go to protect her community, even if it tears apart the only world she’s ever known.

The Cost of Knowing by Britney Morris

Description: Sixteen-year-old Alex Rufus tries to be the best employee he can be at the local ice cream shop, the best boyfriend he can be to his amazing girlfriend, and the best protector he can be over his little brother, Isaiah. But as much as Alex tries, he often comes up short.

It’s hard to for him to be present when every time he touches an object or person, Alex sees into its future. Alex feels these visions are a curse, distracting him, making him anxious and unable to live an ordinary life. And when Alex touches a photo that gives him a vision of his brother’s imminent death, everything changes.

With Alex now in a race against time, death, and circumstances, he and Isaiah must grapple with their past, their future, and what it means to be a young Black man in America in the present.

Description: Tina never worries about being “ordinary”—she doesn’t have to, since she’s known practically forever that she’s not just Tina Mains, average teenager and beloved daughter. She’s also the keeper of an interplanetary rescue beacon, and it’s going to activate. Tina’s legacy, after all, is intergalactic—she is the hidden clone of a famed alien hero, left on Earth disguised as a human to give the universe another chance to defeat a terrible evil.

But when the beacon activates, it turns out that Tina’s destiny isn’t quite what she expected. Things are far more dangerous than she ever assumed—and everyone in the galaxy is expecting her to actually be the brilliant tactician and legendary savior Captain Thaoh Argentian, but Tina … is just Tina. And the Royal Fleet is losing the war, badly—the starship that found her is on the run and they barely manage to escape Earth with the planet still intact.

Kate in Waiting by Becky Albertalli

Description: Contrary to popular belief, best friends Kate Garfield and Anderson Walker are not codependent. Carpooling to and from theater rehearsals? Environmentally sound and efficient. Consulting each other on every single life decision? Basic good judgment. Pining for the same guys from afar? Shared crushes are more fun anyway.

But when Kate and Andy’s latest long-distance crush shows up at their school, everything goes off script. Matt Olsson is talented and sweet, and Kate likes him. She really likes him. The only problem? So does Anderson.

Turns out, communal crushes aren’t so fun when real feelings are involved. This one might even bring the curtains down on Kate and Anderson’s friendship.