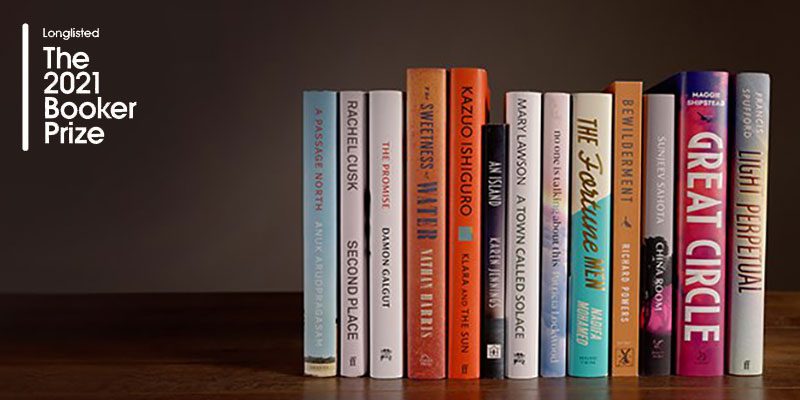 The UK’s most prestigious literary award, The Booker Prize is awarded annually to the best novel of the year written in English and published in the UK or Ireland. Check out the longlist titles below—featuring all of the titles currently available in the U.S.—and look for the shortlist announced in September and the winner in November.

A Passage North by Anuk Arudpragasam

Try it, if you liked: Vertigo by W.G. Sebald or Whereabouts by Jhumpa Lahiri.

Description: A young man journeys into Sri Lanka's formerly war-torn north, and into a country's soul, in this searing novel of love and the legacy of war.

Try it, if you liked: The Blazing World by Siri Hustvedt, The Woman Upstairs by Claire Messud, or Walking on the Ceiling by Aysegul Savas.

Description: A woman invites a famous artist to use her guesthouse in the remote coastal landscape where she lives with her family. Powerfully drawn to his paintings, she believes his vision might penetrate the mystery at the center of her life. But as a long, dry summer sets in, his provocative presence itself becomes an enigma—and disrupts the calm of her secluded household.

The Promise by Damon Galgut

Try it, if you liked: A Golden Age by Tahmima Anam, The Inheritance of Loss by Kiran Desai, or Pachinko by Min Jin Lee.

Description: Haunted by an unmet promise, the Swart family loses touch after the death of their matriarch. Adrift, the lives of the three siblings move separately through the uncharted waters of South Africa: Anton, the golden boy who bitterly resents his life's unfulfilled potential; Astrid, whose beauty is her power; and the youngest, Amor, whose life is shaped by a nebulous feeling of guilt. Reunited by four funerals over three decades, the dwindling family reflects the atmosphere of its country—an atmosphere of resentment, renewal, and, ultimately, hope.

The Sweetness of Water by Nathan Harris

Try it, if you liked: The Prophets by Robert Jones Jr. or Washington Black by Esi Edugyan.

Description: In the waning days of the Civil War, brothers Prentiss and Landry—freed by the Emancipation Proclamation—seek refuge on the homestead of George Walker and his wife, Isabelle. The Walkers, wracked by the loss of their only son to the war, hire the brothers to work their farm, hoping through an unexpected friendship to stanch their grief. Prentiss and Landry, meanwhile, plan to save money for the journey north and a chance to reunite with their mother, who was sold away when they were boys. Parallel to their story runs a forbidden romance between two Confederate soldiers. The young men, recently returned from the war to the town of Old Ox, hold their trysts in the woods. But when their secret is discovered, the resulting chaos, including a murder, unleashes convulsive repercussions on the entire community.

Klara and the Sun by Kazuo Ishiguro

Try it, if you liked: Plum Rains by Adromeda Romano-Lax or The Windup Girl by Paolo Bacigalupi.

Description: Here is the story of Klara, an Artificial Friend with outstanding observational qualities, who, from her place in the store, watches carefully the behavior of those who come in to browse and of those who pass on the street outside. She remains hopeful that a customer will soon choose her. Klara and the Sun looks at our changing world through the eyes of an unforgettable narrator, and one that explores the fundamental question: what does it mean to love?

No One Is Talking About This by Patricia Lockwood

Try it, if you liked: My Year of Rest and Relaxation by Otessa Moshfegh or To Rise Again at a Decent Hour by Joshua Ferris.

Description: A woman who has recently been elevated to prominence for her social media posts travels around the world to meet her adoring fans. She is overwhelmed by navigating the new language and etiquette of what she terms "the portal," where she grapples with an unshakable conviction that a vast chorus of voices is now dictating her thoughts. When existential threats—from climate change and economic precariousness to the rise of an unnamed dictator and an epidemic of loneliness—begin to loom, she posts her way deeper into the portal's void.

Try it, if you liked: The Emissary by Yoko Tawada, Flowers for Algernon by Daniel Keyes, or Census by Jesse Ball.

Description: The astrobiologist Theo Byrne searches for life throughout the cosmos while single-handedly raising his unusual 9-year-old, Robin, following the death of his wife.

Try it, if you liked: Brick Lane by Monica Ali, His Only Wife by Peace A. Medie, or Before We Visit the Goddess by Chitra Banerjee Divakaruni.

Description: A transfixing novel about two unforgettable characters seeking to free themselves—one from the expectations of women in early 20th century Punjab and the other from the weight of life in the contemporary Indian diaspora.

Try it, if you liked: Manhattan Beach by Jennifer Egan or The Seven Husbands of Evelyn Hugo by Taylor Reid Jenkins.

Description: After being rescued as infants from a sinking ocean liner in 1914, Marian and Jamie Graves are raised by their dissolute uncle in Missoula, Montana. There—after encountering a pair of barnstorming pilots passing through town in beat-up biplanes—Marian commences her lifelong love affair with flight. A century later, Hadley Baxter is cast to play Marian in a film that centers on Marian's disappearance in Antarctica. Her immersion into the character of Marian unfolds, thrillingly, alongside Marian's own story, as the two women's fates collide.

Try it, if you liked: The Heart’s Invisible Furies by John Boyne or 4 3 2 1 by Paul Auster.

Description: Lunchtime on a Saturday, 1944: The Woolworths on Bexford High Street in South London receives a delivery of aluminum saucepans. A crowd gathers to see the first new metal in ages—after all, everything's been melted down for the war effort. An instant later, the crowd is gone; incinerated. Among the shoppers were five young children. Who were they? What futures did they lose? This brilliantly constructed novel, inspired by real events, lets an alternative reel of time run, imagining the lives of these five souls as they live through the extraordinary, unimaginable changes of the bustling immensity of twentieth-century London.