James W. Scoville helped establish a Pastor’s Library room at First Congregational Church (now First United Church) next door to the current Main Library building at 834 Lake St. Eventually this library moved into a room in a frame building on Lake Street near Harlem Avenue. Scoville announced he would donate money for construction of a library building. The cornerstone of the Scoville Institute was laid at 834 Lake St. in 1886. The building, completed two years later, was a private subscription library until 1902, when Oak Park voters approved a tax to fund a public library.

Citizens elected the first Library Board of Trustees. The Scoville Institute building served as the primary location for the Oak Park Public Library.

After the community recognized that space was tight, a space needs study headed by Ralph A. Ulveling, director of the Detroit Public Library, concluded that the “Scoville Institute which is obsolete and wholly unsatisfactory should be razed to make way for a new building on the site.” The building had outgrown its functions and become unsafe, yet many in the community held strong sentiment for the old Scoville Institute. Much hard work by many interested citizens and three referendum attempts, accompanied by plans for an increasingly smaller library, followed over the next 22 years. The community approved a bond issue to construct a new library in 1961.

When the referendum to replace the Scoville Institute finally passed, the architectural firm of Holabird and Root was hired to design the new main library building, and construction began in 1963. The building as originally built had a full basement, first floor, and a second floor covering half the building width for a total of 42,324 square feet. All public service areas were originally located on the first floor, which was built with an open design for future flexibility. It was dedicated on May 31, 1964. 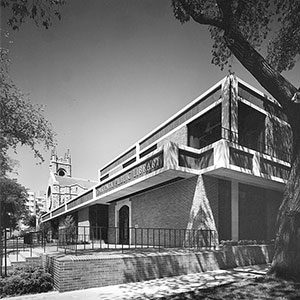 The second floor of the main library building was expanded to the entire width of the building, adding 8,000 square feet. The architectural firm that designed the expansion was Hammond and Beeby, the same firm that later designed the Harold Washington Library Center in Chicago. A new children’s area was built in the expansion as well as an audiovisual area. Continued library growth after the 1977 expansion led again to crowded facilities. Computers, large type books for visually impaired readers, and a whole array of audiovisual material were added to the library collection. In response to the crowding, most staff work areas were moved to the basement of the building.

A Citizen’s Committee for Library Space Needs recommended that a much larger building be constructed – 100,000 square feet or more – and a referendum process began. Fortunately the Library had previously acquired the adjacent property north of 834 Lake St., the site of the Hemingway Interim House. In October 1999, the Hemingway Interim House was relocated, clearing the way for the Main Library to expand to the north with the new main library building.

Oak Park voters approved the Library Referendum for spending $30 million to build a new main library building and to accelerate the rate of repairs at the 63-year-old Maze Branch Library. The proposed new, three-story main library building would more than double the size of the previous building and offer the flexibility to meet future information needs. Nagle Hartray Danker Kagan McKay Architect Planners of Chicago were named architects for the project. The multi-discipline interior design firm, Eva Maddox Associates, Inc. of Chicago was selected to design the interior of the new main library building.

The community bid a final farewell to the second library building in November 2001. A month later the Main Library opened at its temporary location at 215 Harlem Ave. in Forest Park where it would remain during construction of the new building. In the spring of 2002 the old building at 834 Lake St. was demolished and ground breaking for the new main library building at that location was celebrated.

Much of this text comes from a 1964 Oak Park Public Library brochure written by Lester L. Stoffel, Head Librarian, 1955-1967. Compiled by Ted Field.