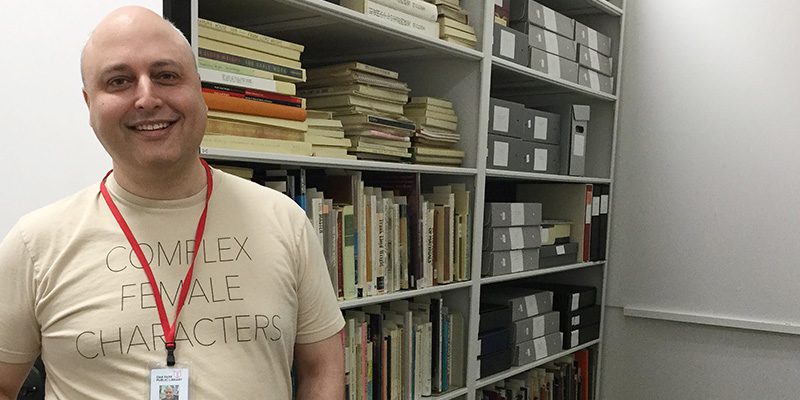 October 12 is #AskAnArchivist Day. Have a question? Ask it now »

Kheir Fakhreldin, who joined the library earlier this year as Archivist in Special Collections, is an active member of the Chicago Area Archivists and has a Master of Science in Information degree from the University of Michigan. Before joining the library, he worked in the archives at the Newberry Library and WBEZ. He’s also worked in public service at La Grange Park Public Library, and as a substitute teacher and a radio co-host.

And now that he’s worked here for a few months—during which he helped bring us the campaign to recognize Oak Park chemist and civil rights leader Percy Julian—we thought we’d ask him to share more about himself and his work.

Why did you want to work in Oak Park?

“It’s a great chance to work both in special collections and in a public library,” Kheir says.

Collections include those related to Frank Lloyd Wright and Ernest Hemingway—both of whom Kheir has been interested in for a long time.

As a kid growing up in La Grange, Illinois, Kheir says his mom took him to lots of Frank Lloyd Wright sites in the Chicago area, including in Oak Park.

“Her love of Wright rubbed off on me,” he says. “And Hemingway is a writer I’ve been interested in since college.”

“In my first semester of library school, I heard a presentation by archives students who had done fieldwork in South Africa with the archives of the African National Congress,” Kheir says, referring to the political party of South Africa’s first president, Nelson Mandela.

“It sounded so interesting to be working with the actual, literal, physical papers of this incredible organization,” Kheir says. “Realizing that even an organization like this has its own papers that archivists need to work on sparked my interest.”

After that, he took an archives class and started working with the Joseph A. Labadie Collection at the University of Michigan, which contains materials related to labor movements, anarchism, and more non-mainstream social movements.

“The experience was foundational for me for my interest in archives,” Kheir says.

Among the materials in that collection, Kheir mentions a few that stand out: original letters of anarchist Emma Goldman, handbills on birth control, and the papers of Ted Kaczynski, otherwise known as the Unabomber.

What are you working on now?

Another researcher was seeking information about a canoe trip Hemingway took with friends down the Des Plaines and Illinois Rivers to Starved Rock.

“A friend of Hemingway’s wrote a letter to him remembering this trip when Hemingway was in the Mayo Clinic at the end of his life,” Kheir says. “Hemingway wrote a warm letter back to him, and we have that letter.”

In addition to learning more about legacy collections like those of Hemingway and Wright, Kheir says he’s thinking about new collections.

“Whose voices are not represented yet?” Kheir asks. “Especially African American, Latinx, and LGBTQ+ communities in Oak Park.”

What are you reading, watching, and listening to?

Here’s where we’re pleased to share that Kheir is our library’s go-to for all things James Joyce! So if you’re someone who’s seeking suggestions for how to read Ulysses, for example, get in touch with Kheir!

“There are dozens of guidebooks out there to help people get started, and thousands of works of criticism,” he says. “I’m a big James Joyce fan and have read Ulysses several times on my own, in classes, and most recently this past fall and spring in a seminar through the Newberry Library.”

“I just made a playlist of my favorite late Lou Reed songs, I’m seeing Phoebe Bridgers live in a couple weeks, and I’m stoked for the new Beach Bunny and Lana Del Rey albums.”

“I’m still really into Anne with an E. When I told my mom about it, she surprised me by telling me Anne of Green Gables was my grandma’s favorite book.”