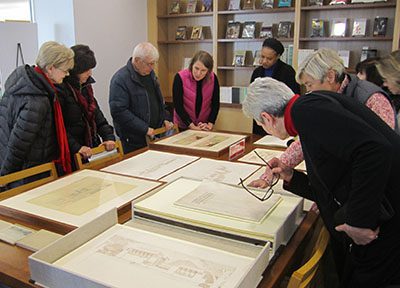 A tour group with the Elmhurst History Museum dropped by the library’s Special Collections last week to get a closer look at original architectural drawings from Frank Lloyd Wright’s first published work, the 1910 Wasmuth Portfolio.

Oak Park’s Unity Temple, the Robie House in Chicago’s Hyde Park neighborhood, and the Winslow House in River Forest are just three of the National Historic Landmarks included in the portfolio, which covers the period from 1893 to 1909.

Copies of the drawings, or “plates,” are included in a current exhibit at the Elmhurst History Museum that runs through March 12, 2017. In Her Own Right: Marion Mahony Griffin tells the story of an overlooked female architect who collaborated with Wright but never earned the same level of fame.

A question of authorship

Recently, more and more architectural historians have been taking a closer look at the legacy of Wright—considered by many authorities to be the 20th century’s greatest architect—and the contributions of other architects who worked in his Oak Park Studio, including Marion Mahony Griffin.

An architect the Elmhurst History Museum describes as a “gifted, visionary illustrator and architect” and one of the Prairie School architectural movement’s “most important and overlooked figures,” Griffin is now believed to be responsible for a large number of the 100 plates in the Wasmuth Portfolio.

“You can tell from the foliage in this plate,” Tarullo said, pointing to one of the drawings brought out from climate-controlled storage for viewing by the group. “She had a distinctive style.”

The Wasmuth Portfolio owned by the library is a “presentation copy” that was created for Frank Lloyd Wright’s special clients and friends. In 1969, the library—specifically, head librarian Barbara Ballinger—obtained the copy from Wright’s son John Lloyd Wright.

In the 1990s, the library received a $6,000 grant to conserve the Wasmuth Portfolio. The work was done by the Northeast Document Conservation Center, which Reiher said is “known around the world for their conservation expertise.”

More treasures for anyone to see

Special Collections welcomes tour groups about once a month, mainly schools, clubs, and nonprofits. “It’s an opportunity to show off some of the wonderful things we have in our Special Collections,” Tarullo said.

Like a copy of The House Beautiful, an 1896 book designed by Wright and printed by hand at the Auvergne Press, which was located in the Frank Lloyd Wright-designed Winslow House in River Forest. Tarullo noted that the book was stamped as having been received by the library in 1937.

You don’t have to be a scholar or part of a tour group to see these treasures. Anyone can make an appointment to view materials in person at the Main Library.

“I love people who are interested in Frank Lloyd Wright,” Tarullo said. “They’re always very passionate, and they’re just blown away by what we have here at the library—that an institution like us has these items. The librarians who obtained these items were very forward thinking.”