But after a while, “I started to see—hold on—this works,” he said. “Especially with people who experience trauma on a regular basis. You’ve got to have a place to vent, to speak your truth.”

Crawford (pictured far right) works with Bridging the Divide, a program of the YMCA of Metro Chicago. It was developed to help build understanding between youth, law enforcement officials, and other community members.

“We’re building relationships with real kids out in communities who probably will have interactions with police,” he said.

Crawford spoke during the closing panel of the Restorative Justice Youth Conference in October, a two-day event that brought people together for a weekend of workshops, peace circles, and panel discussions at the Main Library.

Also on the panel was Darrius Lightfoot (pictured at left), co-founder of Fearless Leading by the Youth, which trains youth in community organizing.

For a long time, Lightfoot said, he did not want to sit down with police officers in a peace circle. He didn’t think he could connect his everyday struggles with theirs.

“These are the people I’m afraid of shooting me,” he said. “I’m very traumatized by the police.”

But after hearing officers say they also fear for their lives every day on the job, “I connected my struggle to their struggle,” he said.

Lightfoot added that, for him, the work of repairing relationships is ongoing. 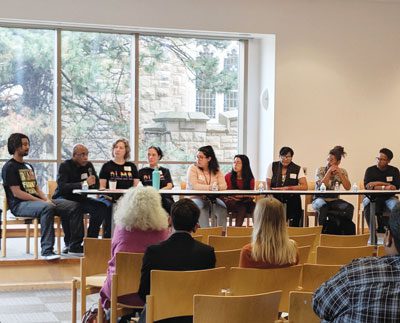 What is restorative justice?

Restorative justice is an approach that focuses on repairing the harm caused by crime. Repair means healing for the people directly involved, and for the community at large.

“This model relies on proven techniques of forgiveness and empowerment, which are far more successful than our current system of punishment,” wrote participant Susan Lucci in a blog post after the conference, noting that the United States has the highest incarceration rate and largest prison population in the world.

“We are a public institution, and we love to share information,” said the library’s Social Services Specialist Stephen Jackson, who organized the weekend conference along with young people. “That’s what libraries do.” 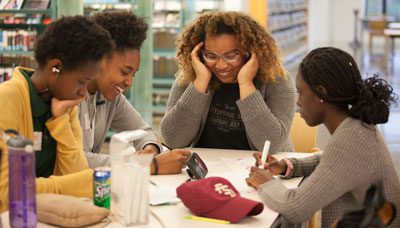 Peace circles are a key part of the approach. In a circle, those affected are brought to encounter one another, amends are made for the crime, and all parties are reintegrated into the community.

“The most soulful parts of the weekend were the opening and closing circles, where we were all seen, heard and connected,” Lucci wrote.

“One of the most poignant moments was when Stephen Jackson asked the panelists to name individuals who had guided, inspired, uplifted, and loved them. Hearts broke open with gratitude. There wasn’t a dry eye in the room. It turns out that not one of us successfully navigates life solo; we absolutely cannot pull ourselves up by our own bootstraps. We can’t become ourselves by ourselves. We need each other, which our ancestors knew so well and we seem to have forgotten.”