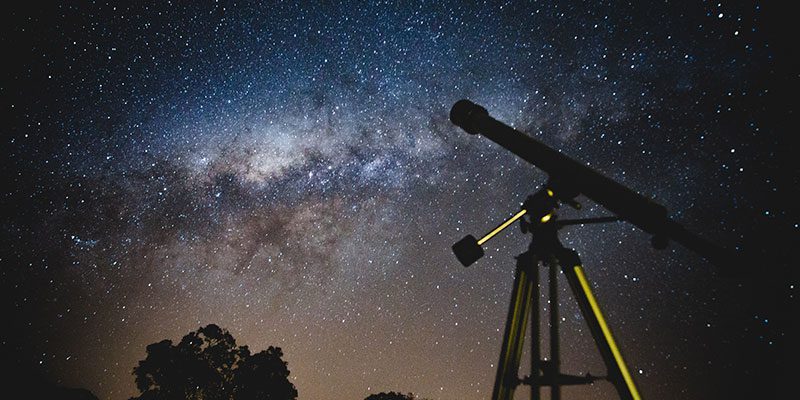 The physical sciences study the non-living systems of our world, and astronomy expands that investigation into the universe! Galaxies, stars, planets—we want to know about their physics, their movement, their atmospheres. Just like Galileo Galilei, who turned his telescope towards the stars and recorded what he saw, you too can be an observational astronomer.

Includes A Child’s Introduction to the Night Sky, a star wheel, and astronomy binoculars with a smartphone adapter. Use the adapter to line up your phone’s camera and capture the celestial beauty you’re observing! The book also provides an introduction to astronomy, discussing how planets get their names, the best time to spot a “shooting star,” and why the moon changes shape.

From the Big Ideas Simply Explained series, a guide to milestone developments in astronomy, telling the story of our ideas about space, time, and the physics of the cosmos—from ancient times to the present day. From planets and stars to black holes and the Big Bang, take a journey through the wonders of the universe.

Star Stories: Constellation Tales From Around the World

For thousands of years people have looked up to the night sky and told stories about the stars. These epic tales tell of vengeful gods and goddesses, of monsters and heroes. Others try to make sense of the natural world, or unravel the mysterious forces of the universe.

Hosted by Neil DeGrasse Tyson, this documentary series explores the history of science and how we found our place in the cosmos.

Features Skywatch Weekly, with updated information about what to look for in the night sky, plus experiments to do at home and virtual exhibits.

The world’s only weekly television series on naked eye astronomy. For over 40 years, their short episodes have had us looking up!

Resources especially for students, including videos, home experiments, and more. While space exploration isn’t strictly part of the astronomy field, NASA’s work relies on scientists from many areas.

Genevieve is a Children’s Librarian who’s constantly on the hunt for great graphic novels, innovative ways to get books into kids’ homes, and the perfect cookie recipe. She’s pretty sure that none of those missions will ever feel “finished,” and that’s just fine by her.