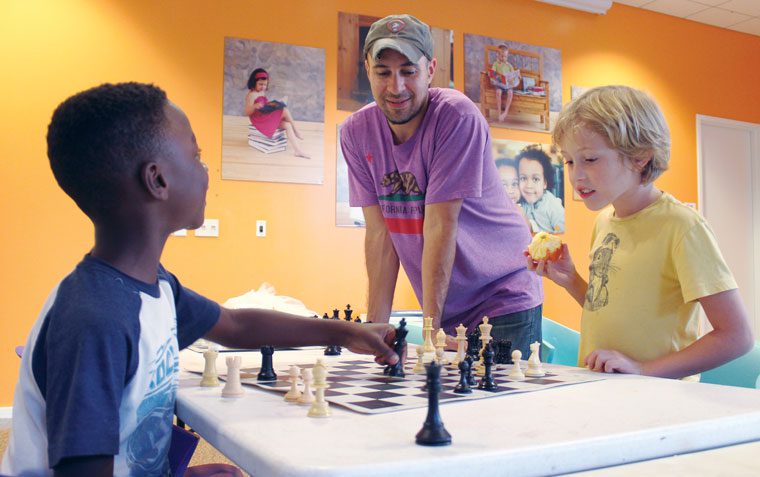 Poet Luis Tubens has been working with young people at the Main Library since January 2017. That’s when he became the library’s first artist in residence, consistently drawing lots of middle schoolers to his after-school writing workshops and open mics.

Although his residency ended in summer 2017, Tubens didn’t stop working with kids at the library. Soon after he launched a weekly chess club for kids ages 5-13.

“I teach chess to challenge the young minds of our future to think critically,” Tubens said. “Chess teaches sacrifice, strategy, and it exercises the ability to think ahead.”

Tiffany Rowoldt, whose 7-year-old son participates, said, “It’s Rocky’s favorite thing. He always talks about what strategies Luis is going to teach him.”

Kyle Netisingha said his daughter Savi, age 7, has been attending for the past year, ever since Tubens encouraged her to join.

“We like how he engages kids and does the lessons,” Netisingha said, adding that his daughter is typically the only girl who attends. “We like to see her step up to the challenge.”

Savi was encouraged to get into chess after watching The Queen of Katwe, a film that depicts the life of a real Ugandan girl who grew up in a slum and became a top chess player (also available in book and audiobook formats).

After a winter break, the weekly Chess Champs Club returns on Tuesday, February 5 at the Main Library. See it on the calendar »