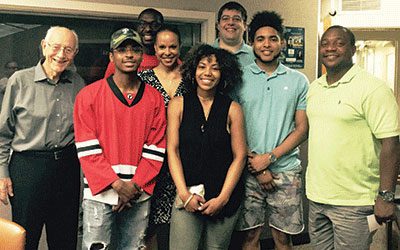 Last March, as part of our strategy to rethink how we engage with all patrons, we hired a social worker—a first for us, but part of a growing trend for public libraries, including those in Evanston, Denver, and Washington, DC.

“Around the nation, public libraries have become de facto community health centers for people who don’t have access to other resources,” said Social Services and Safety Director Robert Simmons.

Simmons and his team—including Social Services Specialist Stephen Jackson, who focuses on youth development, and four part-time Safety and Security Monitors—work to connect library patrons with the services they need, and to ensure a safe environment for all.

“The team really makes the effort to talk to people and get to know them, including kids,” said Children’s Digital Learning Librarian Anne Bensfield. “There’s been a lot of improvement, and it’s changing the culture. And I’m happy that people are getting linked with services in the community beyond what’s here at the library.”

What do they do?

The team reaches out to patrons who need information, advocacy, and referrals to social services, especially those experiencing homelessness, poverty, and mental health and substance abuse disorders. They also train library staff in ways to serve at-risk populations, and collaborate with area organizations like Housing Forward, Oak Park Township, and school districts 97 and 200.

“The key is having relationships, not just in Oak Park but in the entire Chicagoland area, to get people what they need,” Simmons said.

After getting to know Simmons last fall, Housing Forward Street Outreach Specialist Ebony Martin now visits the library twice a week, getting clients housing support much faster. “We collaborate to keep as much peace in the library as possible,” Martin said. “I get a lot of referrals from Rob, and we share resources with each other.”

This year, Simmons met a young mother who was living in an abandoned building with her 5-week-old baby. Within 48 hours, he connected her with Martin, who placed the mom and her baby in a hotel and then a transitional shelter, and helped her access services through New Moms and the Special Supplemental Nutrition Program for Women, Infants, and Children (WIC).

“Before, we didn’t have much time to get to know people and their needs,” Simmons said. “Now there’s a greater awareness of what’s happening in people’s lives. We also have more options for how to handle situations, how to de-escalate problems before they start affecting other people using the library.”

“It’s monumental and priceless for people to have access to this at the library, someone they can turn to,” Simmons said. “Most people we work with are six degrees of separation from comprehensive resources. They don’t have a neighbor or someone else to connect them to a service right away. Through a referral-based model, we’re able to identify vulnerable patrons who for years were not receiving community-based outreach support. Now they have that.”

As one community partner, Lisa DeVivo, Executive Director of the Community Mental Health Board of Oak Park Township, said, “We are stronger together, bringing resources out to the community in a safe, educational environment. We are working toward the same goals to achieve collective impact.”