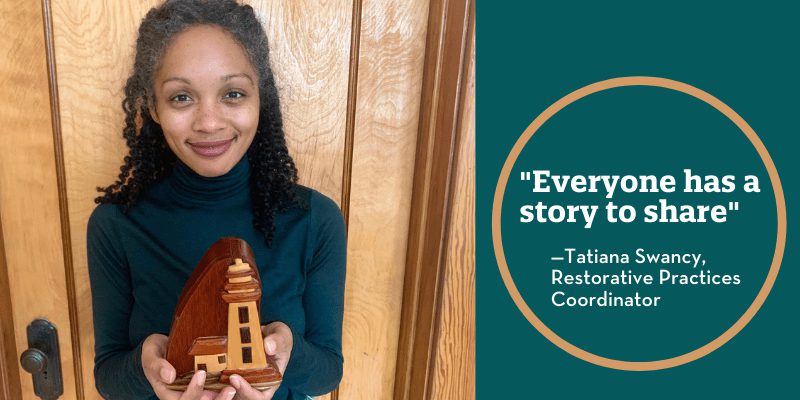 “A peace circle is a tool to have community conversations where everyone is valued,” she explains. “It’s rooted in the idea that everyone has a story, and it’s a great way to address difficult topics. It has the effect of building bonds, or at least trust with one another. What you say in the circle stays in the circle. We work to make it a space where people can share.”

Training to become a circle keeper in January 2020 “was a really transformative experience for me,” Tatiana says. “It was the best work experience I’ve ever had.”

Now, one year later—a pandemic year in which she’s facilitated virtual circles over Zoom, creating welcoming spaces where students, parents, community members, and staff feel safe to reflect, to share fears and hopes—Tatiana has been promoted as the library’s first Restorative Practices Coordinator.

In this new role, Tatiana develops, implements, and promotes practices and programs that support the library’s anti-racism journey, and centers the stories and experiences of Black, Indigenous, and people of color (BIPOC) communities, says Manager of Adult Services Alexandra Skinner.

This broadens Tatiana’s work with staff and community through the continued use of peace circles, programs, partnerships, and staff learning.

‘Exactly what restorative practices are about’

“Our organization couldn’t have picked a better person for this role to continue the work we have started,” says Manager of Teen Services Stephen Jackson, who began using peace circles and restorative practices at the library five years ago. “Tatiana’s calm and nonjudgmental way of engaging will not only serve our patrons well but is exactly what restorative practices are about.”

At the foundation of restorative practices, Tatiana says, is that “everyone has a story to share. And to repair harm that’s been done, you listen to everyone’s stories, and you come up with solutions together.”

Restorative practices, including peace circles, have increasingly been used at the library over the past five years. They take a group perspective and include bringing empathy to a situation, seeking first to understand, and helping people without doing further harm.

And they are a natural fit with the library’s vision to empower every voice in our community and mission to share the information, services, and opportunities that fulfill Oak Park’s aspirations.

Restorative practices also fit with our library’s turning outward approach—an intentional way of listening to and learning about our community, and grounding work in the community’s shared aspirations.

Peace circles have roots in indigenous cultures, from those in North America and all over the world. They can be used to build community, to offer support and healing, to resolve conflicts, and more.

In the past year Tatiana and other trained library staff have led virtual circles due to COVID. For example, during the Oak Park Elementary School District 97 Virtual Parent University in August, they helped create a space for families to share their fears, anxieties, and hopes for remote learning and the upcoming school year.

During the library’s virtual Restorative Justice Conference in October, they led circles over Zoom, focusing on mental, emotional, physical, and spiritual health and balance.

And in an anti-racism collaboration between the library, District 97, the E-Team, and Dominican University, they used virtual peace circles to discuss Stamped by Jason Reynolds and Ibram X. Kendi with the middle schools and the community.

‘I have a very holistic view of anti-racism’

Anti-racism is a primary focus of the new Restorative Practices Coordinator role, and a priority for Tatiana. She serves on the library’s Anti-Racism Advisory Team, which is developing the library’s first Anti-Racism Strategic Plan.

Throughout 2021, she is coordinating staff and community anti-racism circles, as well as other programs related to the Anti-Racism Resource Challenge.

One of her goals is that “anti-racism is not seen as something that white people need to learn. It’s for all of us and includes celebrating Black joy and culture.”

An upcoming program she’s planned and is excited about is “Celebrating Black Futures: Live Performance, Art, and Conversation” on Friday, February 26, 5 pm.

Another goal is to strengthen relationships with community advocates who identify as BIPOC. Part of this is recognizing people in the community who are already doing anti-racism work, and looking for ways to collaborate and support them with library resources.

“As the library, we have the responsibility to use our platform to support other people and recognize what we don’t know,” she says.

‘A testament to how committed we are’

The library currently has 23 trained peace circle keepers on staff, including 13 who just completed their training over Zoom this February.

This growing number will allow library staff to facilitate more circles for the community and staff, and to keep collaborating with other restorative justice practitioners in Oak Park.

“It’s a testament to how effective peace circles have been in the library space and how committed we are to growing the practice,” Tatiana says.

‘Investing yourself and establishing trust’

While virtual circles can be more accessible, Tatiana says there’s one thing she’s looking forward to when we’re able to once again gather in person: the talking piece. This is an object that’s meaningful to the circle keeper, and that everyone passes around and holds when it’s their time to talk.

“It’s a very important part of facilitating,” she says. “By allowing everyone to hold your talking piece, you are investing yourself and establishing trust. As you are asking people to trust you and trust the process, you are showing that you are trusting them and opening yourself up.”

Pictured above, Tatiana holds one belonging she plans to use as a talking piece: a small, handmade wooden box with the shape of a lighthouse on the cover.

“My now-husband gave the box to me when we first started dating six years ago,” she says. “He bought it for me on a trip to New Orleans, which also happens to be where my grandfather grew up. My grandfather ended up migrating west to California as an adult, which is where I’m from. The box makes me think of both my husband and my grandfather, who never got to meet in this life.”