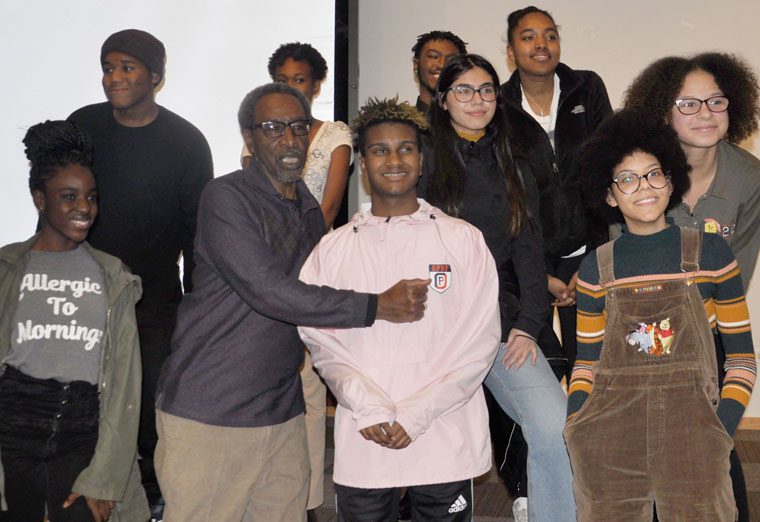 “Some people have a tendency of underestimating young people,” said Middle School Librarian Jose Cruz. “When sometimes it’s that we’re not providing them with something that is interesting for them, so you won’t see the results.”

That hasn’t been the case for the Living History Project, a grant-funded initiative that’s formed a tight-knit group of dedicated young people at the library.

“Living History is a safe space led by youth, for youth,” said Azreinna Winston, age 17 and a senior at Oak Park and River Forest High School. “We educate each other, for each other, with each other.”

In November, in front of an audience of their peers, family members, community members, and educators, the group presented on topics they’d been learning about, discussing, and researching for the previous six months, including women’s rights, race, and criminal justice.

“We worked really hard to get to where we were for that presentation,” said Winston, who organized and hosted the public event.

Since May, the Living History group had been meeting at the Main Library twice a week. The 10 core members, who ranged in age from 13 to 23, discussed issues both personal and political.

Guiding them was Billy Che Brooks, who has a history of working with young people. Brooks served as deputy minister of education for the Illinois chapter of the Black Panther Party from 1968 to 1972, and later joined the Better Boys Foundation in Chicago’s North Lawndale neighborhood.

“I was in awe,” Brooks said. “I had nothing to do with those presentations, I promise you. I was just a facilitator.”

Leading up to the November 28 presentations, Brooks said he had “total faith” in the young people, who he had seen grow as listeners, critical thinkers, and public speakers since May.

“A lot of them were shy when we started out, unable to really be expressive in terms of what their thoughts were, what their feelings were, and what they were compassionate about,” he said.

In their regular meetings every week, the participants stood and spoke about their day or anything on their minds.

Librarian Jose Cruz agreed. “We’re talking about a situation in which they themselves set their own curriculum,” Cruz said. “They’re shaping their own education. They’re walking themselves to their own issues, and they’re helping each other out. It’s a genuine process.”

‘A level of tenacity’

Throughout the six months, the group read The New Jim Crow by Michelle Alexander and Eyes on the Prize by Juan Williams, discussed social justice issues, and researched topics for the November presentations.

“Here they are researching a topic not for class, not for credit, but they’re doing it for this presentation,” Cruz said. “It’s a level of tenacity.”

One thing that stood out to Winston as she learned about social justice movements in history?

At age 70, Brooks said, he learns more from young people.

“I’ve learned that old people like myself, and adults in general, need to understand that young people have more than a voice. They have ideas, they have passions, and we need not suppress it,” he said. “We need to listen to them. The same way we wanted people to listen to us when we were young.”

After a winter break, the Living History Project will regroup starting January 7, 2019. See the calendar »