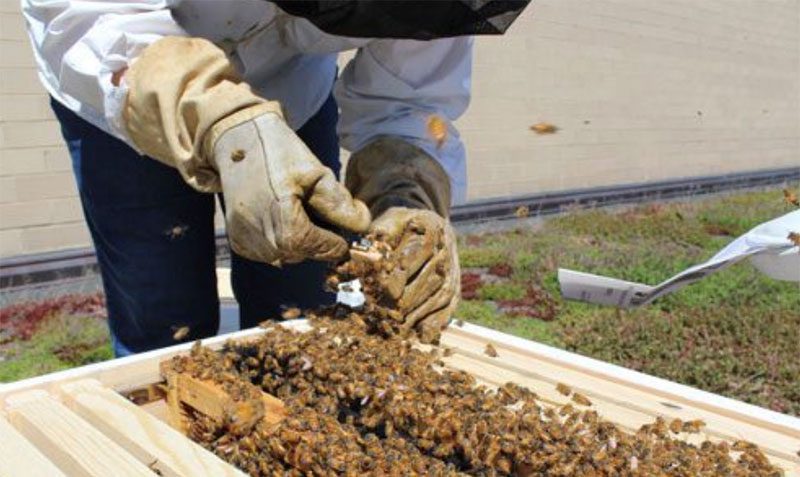 As part of our ongoing focus to sustain the natural environment and to offer new opportunities to learn, we installed two beehives in the spring of 2019, buzzing with up to 20,000 Italian honeybees, on the Main Library’s Green Roof.

With our two rooftop hives, the library joined a small community of beekeepers in Oak Park—including resident hobbyists and the Village of Oak Park. At the time, the library was one of nine permit holders licensed to keep up to two beehives in Oak Park, according to the Department of Public Health.

Who manages the hives? An experienced volunteer and a staff ‘convert’

Experienced beekeeper and library volunteer Debbie Becker helped us get our hives up and buzzing in April 2019, and she regularly visits to help maintain them.

Becker, who belongs to an area beekeeping group called WAX | Westside Apiary eXperience, said she first became interested in beekeeping when she took a class at the Garfield Park Conservatory.

When an Oak Park ban on beekeeping was lifted in 2011, she became a backyard beekeeper, harvesting 70 pounds of honey from her hives one summer.

“It looked like an impressive amount,” she said. “Usually in the first year, nobody takes much.”

In fall 2019, after our first season with the bees, we were able to harvest a big jar of honey, while leaving enough honey in the hive for the bees to feed on during the winter.

And in our second and third years, we harvested even more!

Thanks to Becker, the library has been able to donate more than 150 individual use bottles of raw rooftop honey to Beyond Hunger.

Besides producing honey and beeswax, honeybees are important pollinators of agricultural crops such as almonds. It’s often said that pollinators—including honeybees and other bee species, butterflies, birds, and bats—provide for one of every three bites of food we eat.

That’s because, in order to produce seeds, fruit, and more plants, plants must be pollinated. Unfortunately, many pollinators are in decline, for reasons including loss of habitat, disease, climate change, and pesticide use.

‘Spread the word and keep on planting’

To provide enough forage for honeybees and native bees, gardeners can reduce turf lawn space and add a diversity of plantings, including native and pollinator-friendly plants, such as aster, borage, chives, Joe Pye weed, and lavender.

“Spread the word and keep on planting,” Becker says.

And consider letting the dandelions grow. They’re among the flowers with pollen high in the bacteria lactobacillus acidophilus, which is great for bees’ gut health.

“Gardeners are concerned and educating themselves,” Becker says, mentioning that she was thrilled to see what happened when someone posted about getting rid of dandelions on a local gardening Facebook page.

“Several people told her to hold on a second and keep the flowers for the bees,” she says. “That would not have happened three years ago.”

Check out titles from the catalog