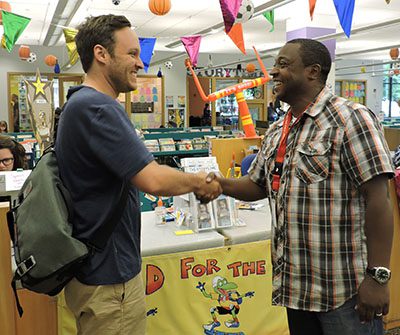 Rethinking how we engage with all patrons

In his first week as Social Services and Safety Director, Robert Simmons found the demand for his social work advocacy and referral services even greater than expected.

“The library provides a snapshot of the overwhelming discrepancy between the haves and the have-nots,” Simmons said. “Oak Park is only 4.7 square miles, yet we serve people from at least nine communities every day.”

Simmons’ February hiring was the first impact of the library’s effort “to rethink the ways we work with and engage with all of our patrons,” Executive Director David J. Seleb said. “Including those who are vulnerable, marginalized, or at-risk, who use our facilities on a daily basis, and for whom we should be providing services.”

Over the past few years, Seleb said, the library has expanded its understanding of how to serve such patrons, thanks to strengthening relationships with other organizations that work with some of the same populations, like Oak Park Township and Housing Forward (formerly PADS), which operates homeless shelters in Oak Park.

“The library is an open, accessible, welcoming, and generally very safe space to be. When shelters are closed, when schools are not in session, when people don’t feel safe in their own homes, we are open,” Seleb said. “We decided we needed someone on staff who understands the challenges of working with at-risk, underserved populations, in a much better and deeper way.”

Providing the resources and information our patrons need

With 16 years of social service experience, most recently as Youth Interventionist for Oak Park Township, Simmons was able to dive right in.

“My role is a product of all the hard work the library has been doing around the strategic priorities of learning, engagement, and stewardship,” Simmons said. “I’m building an infrastructure within the library to provide a continuum of care, and one of my main goals is to demonstrate the impact of the work we’re doing.”

Since March, Simmons has helped about 15 patrons per month, connecting them with resources like mental health care, substance abuse recovery, veterans’ benefits, and domestic abuse assistance. He partners with organizations like Housing Forward and Oak Park school districts 97 and 200, and trains library staff in ways to serve at-risk populations.

“About 35–40 percent of the individuals and families we’ve engaged with are experiencing homelessness,” Simmons said. “I’ve also helped people with Medicare, Medicaid, and immigration issues—working through paperwork and processes to get people the outside services and support they need. The library is all about access, and I love that we can provide the resources and information that our patrons need.”

Between reaching out to patrons and responding to calls from library staff, Simmons often holds impromptu group sessions with teens on resolving conflicts. “We’ll call their moms up on the spot and talk something through,” he said.

In June, the library hired three part-time Safety and Security Monitors to replace security guards who had previously been contracted from an external firm.

The monitors, who provide security about 68 percent of the time the library is open, including every afternoon through closing time, are trained by Village of Oak Park police and the library using a “trauma-informed care” approach that Simmons also presented to library staff in May.

“Now when we see someone not following the library’s rules of behavior, we can ask, ‘What’s going on with you?’ as opposed to ‘What’s wrong with you?’” Simmons said. “We’re prioritizing respect and dignity.”

In July, Stephen Jackson joined the team as Community Resources Specialist. Jackson has been heavily involved in youth development, including as an Oak Park Township community youth advocate and student mentor at Oak Park and River Forest High School.

The presence of Simmons’ team helps the library be “a safer, more welcoming place for everyone,” said Jake Bradley, Outreach and Engagement Manager at Housing Forward.

“In some ways, library staff have functioned as social work clearinghouses, in addition to providing traditional reference services,” Bradley said. “The front-line staff are seeing people all day, every day, who may benefit from having social work support in the library. Having Rob and his team there as a resource for library staff to do good customer service and support library patrons is a big boon for the library as well as the people of Oak Park.”

Other public libraries that employ social workers include those in San Francisco, Denver, and Washington, DC. In July, Simmons joined the DC Public Library to present an American Library Association webinar detailing the front lines of social work and how libraries can better support patrons in need.

You also can listen to a podcast with Executive Director David J. Seleb, as he talks with RAILS (Reaching Across Illinois Library System) about the Community Resources Team.