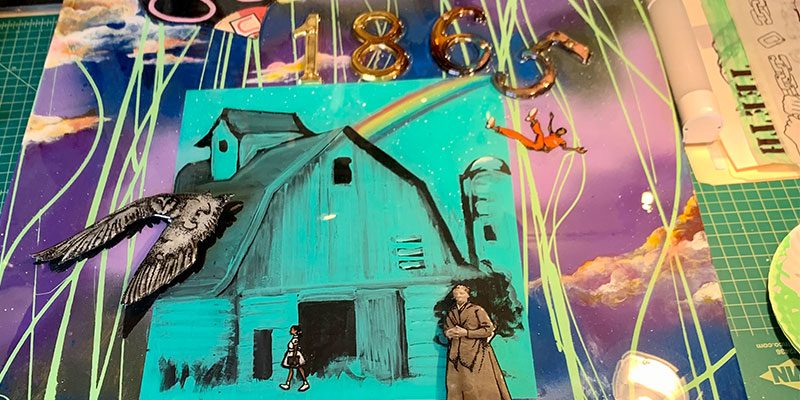 Oak Park artist Tia Etu will unveil her latest contribution to art in the library this June, when she presents her mixed-media painting The Call in a Main Library Idea Box exhibit. You can join the artist and see her work in a reception on Saturday, June 18.

The Call is a Juneteenth-inspired artwork that was commissioned for the library’s permanent art collection. Etu named this work The Call to refer to owl calls that Harriet Tubman would make to let enslaved people know it was safe to move through the Underground Railroad network of the 1800s.

“Tubman is in the piece to show the struggle and her commitment to free her people,” Etu says.

“While it is about the freedom of slaves, it deals with the fact that African Americans are still not free,” Etu adds. “It is not true that we were freed, but freedom is still possible. There is hope.”

More about The Call

Etu shared more about the meanings behind different elements of The Call. In her words:

Etu has collaborated with the library many times in the past, in what the library’s Restorative Justice Coordinator Tatiana Swancy calls “a longstanding and fruitful partnership.”

In 2018, she worked with teen volunteers on a mural at the Main Library. In 2019, she led more teen volunteers in creating the peace sign sculpture standing outside Dole Branch.

That sculpture and her painting Are We There Yet? were featured on the Spring 2020 and Fall 2016 covers of the library’s Storyline magazine.

Her painting Passing is also in the library’s permanent art collection, and can be viewed in Main Library Study Room C.

You can hear more from Etu, who will join other local Black creatives for performance, art, and conversation in the Celebrating Black Futures event on Thursday, June 16.