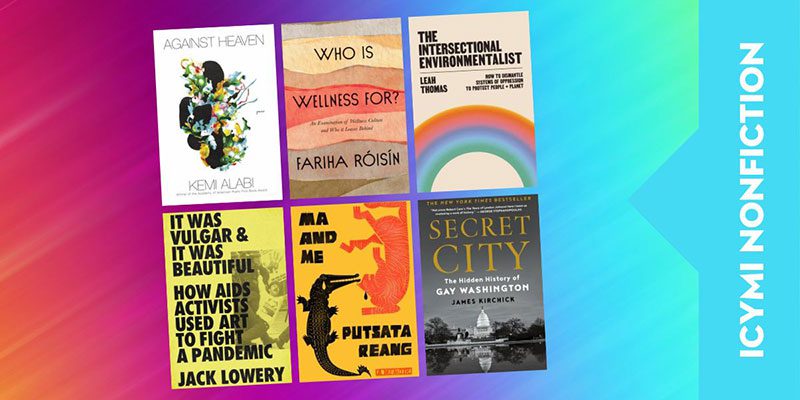 Spring and summer are filled with excellent book releases. So many that it can be easy to miss a book that could be your next fav. Don’t worry, we’ve got you! Check out these recently released books that we think you’ll love. See our list of recently released fiction too »

Against Heaven: Poems by Kemi Alabi

Why you should try it: This won the Academy of American Poets First Book Award, selected by none other than CLAUDIA RANKINE.

Description: Kemi Alabi's transcendent debut reimagines the poetic and cultural traditions from which it is born, troubling the waters of some of our country's central and ordained fictions—those mythic politics of respectability, resilience, and redemption. Instead of turning to a salvation that has been forced upon them, Alabi turns to the body and the earth as sites of paradise defined by the pleasure and possibility of Black, queer fugitivity.

Ma & Me: A Memoir by Putsata Reang

Why you should try it: This memoir has been called "luminous" (Publisher's Weekly) and a "must-read" (Library Journal).

Description: Putsata lived to please Ma and make her proud, hustling to repay her life debt by becoming the consummate good Cambodian daughter. But Put's adoration and efforts are no match for Ma's expectations. When she comes out to Ma in her 20s, it's just a phase. When she fails to bring home a Khmer boyfriend, it's because she's not trying hard enough. When, at the age of 40, Put tells Ma she is finally getting married—to a woman—it breaks their bond in two.

It Was Vulgar & It Was Beautiful: How AIDS Activists Used Art to Fight a Pandemic by Jack Lowery

Why you should try it: Not only a different angle exploring activism during the AIDS epidemic but also a fascinating examination of art as political protest.

Description: In the late 1980s, the AIDS pandemic was annihilating queer people, intravenous drug users, and communities of color in America, and disinformation about the disease ran rampant. Out of the activist group ACT UP (AIDS Coalition to Unleash Power), an art collective that called itself Gran Fury formed to campaign against corporate greed, government inaction, stigma, and public indifference to the epidemic.

Why you should try it: Using recently declassified documents, the author illuminates the lives and stories of LGBTQ+ government workers forgotten in our watered-down histories.

Description: Beginning with the tragic story of Sumner Welles, Franklin Delano Roosevelt's brilliant diplomatic advisor and the man at the center of "the greatest national scandal since the existence of the United States," James Kirchick illuminates how homosexuality shaped each successive presidential administration through the end of the 20th century.

Who Is Wellness For? An Examination of Wellness Culture & Who It Leaves Behind by Fariha Roisin

Why you should try it: The self-help/self-care industry is huge. Roisin says it's time to think about who drives it and who gets left out.

Description: In this thought-provoking book, part memoir, part journalistic investigation, the acclaimed writer and poet explores the way in which the progressive health industry has appropriated and commodified global healing traditions. She reveals how wellness culture has become a luxury good built on the wisdom of Black, brown, and Indigenous people—while ignoring and excluding them.

The Intersectional Environmentalist: How to Dismantle Systems of Oppression to Protect People + Planet by Leah Thomas

Why you should try it: For anyone interested in combatting climate change in a socially conscious way—which Thomas argues should be every climate activist.

Description: This book is simultaneously a call to action, a guide to instigating change for all, and a pledge to work towards the empowerment of all people and the betterment of the planet.