Home » News & Events » Arts & Culture » Meet Jabez: ‘I want all my programs to be community-forward’ 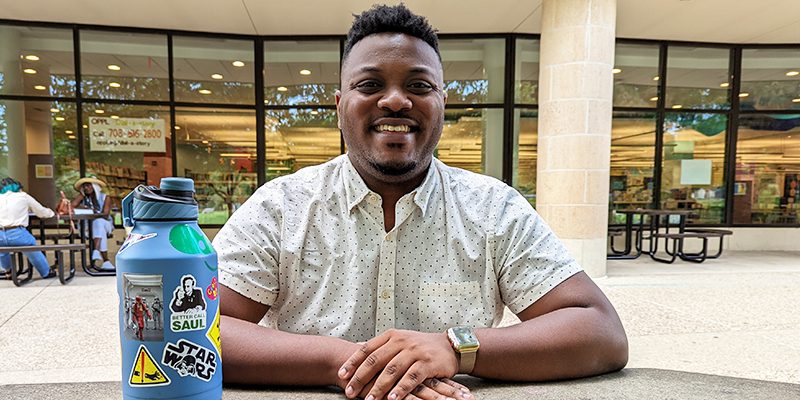 We’ve got some fantastic programs for adults coming up this fall, thanks to Jabez Patterson, Programming Librarian in Adult Services.

Jabez, who joined the library in January, collaborates with local authors, musicians, and more to bring high-quality virtual and in-person programs to the library.

“How can I make a program or event to celebrate these things, while extending the potential for a wider audience and extending the reach of the library too?” he says he asks himself.

Jabez didn’t always want to be a librarian, though.

What changed his mind? His coworkers at Niles-Maine District Library, for one.

Before joining the library, Jabez was working two jobs—one at St. Giles School in Oak Park and the other at Niles-Maine District Library.

While he loved working with students at St. Giles, he says, “Everyone saw something special in me outside of being a teacher and believed that I can be a difference-maker in librarianship. Along with giving me the tools and resources for bringing representation to the profession.”

So he decided to go to school to become a librarian, earning his Master’s of Library and Information Science degree from Dominican University in 2021.

“As you can see, I’m a person of color,” he says. “And there are not a lot of male librarians in the profession. I’m excited to bring more representation into the field.”

‘Let’s build a sense of community’

Jabez, who co-leads the monthly Scrabble Club that meets at the Main Library every second Tuesday, says it’s important to offer a mix of in-person and virtual programs.

“I want everyone to attend,” he explains. “But I understand the pandemic is still going on. For people who are high-risk, I want to make sure they can access these programs too.”

“I want all my programs to be community-forward,” he adds. “Let’s have these programs to build us up together. Let’s build a sense of community. I don’t want to leave people out.”

While going to library school, he says, “I learned that a library isn’t just a place full of books. It’s a community center that values people, ideas, growth, accessibility, and a foundation for a strong community.”

“I’m honored to be part of a community that recognizes that libraries are for everyone,” he says.

Some of the programs Jabez is most excited about this fall:

A virtual program exploring NASA’s James Webb Space Telescope, which is already revealing mind-blowing images from the early universe. Register to join us on September 20 with astronomy educator Michelle Nichols from the Adler Planetarium.

Author Natalie Moore in this year’s Barbara Ballinger Lecture. Moore’s latest book, The Billboard, centers on how a fictional women’s clinic in Englewood gets involved in public debate over abortion. Join us on October 9 in person at the Main Library or virtually.

More events with local authors. “I want to give them a chance to shine,” he says. For example, author Laura Kat Young will discuss her debut horror novel The Butcher both in person and virtually on October 20.