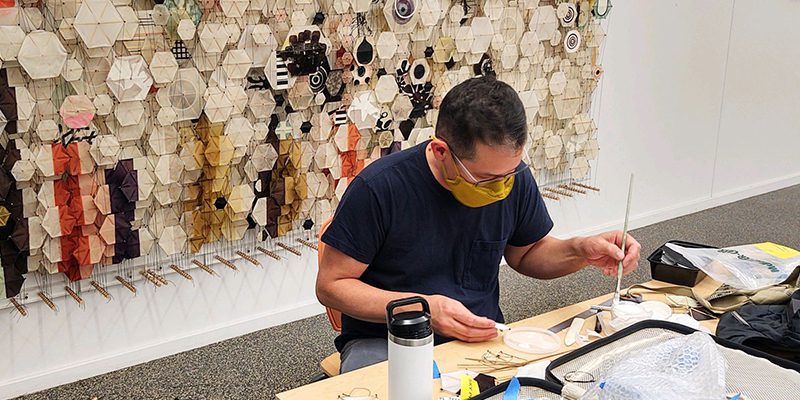 Artist Jacob Hashimoto stopped by the Main Library in September. While in the area for the opening of his show at a Chicago gallery, he came to Oak Park to make repairs to parts of his intricate artwork in our library’s permanent art collection.

Hashimoto’s 8-by-12-foot piece skip skitter start trip vault bounce – and other attempts at flight is a sculptural wall piece that hangs on the Main Library’s second floor. It can be seen as you head north from the stairs and elevators, past the service desk, and toward the shelves of new fiction.

Kite work: ‘A sense of craft’

The Main Library piece is an early example of what Hashimoto calls his “kite work,” described on his website as “dense compositions of elaborately patterned and collaged bamboo and rice paper kites,” with “kaleidoscopic images” emerging to reference nature, the cosmos, virtual space, and more.

The work is made up of individual dyed paper kites strung with nylon thread onto wooden rods, and collaged into a layered whole.

When he made it in 2005, it was the biggest wall piece he’d ever done, he says. And unlike later pieces—such as those in his latest exhibition, Misunderstandings (at the Rhona Hoffman Gallery through October 23)—he did it mostly on his own, by hand.

“These early wall pieces are special to me because I just sat and made every single one of those little parts,” he says, estimating that it must have taken him three or four months to complete.

“I think there’s a sense of craft in the hand and the imperfection,” he says. And so when the piece needed mending, as some kites had gotten tangled and broken, who better than the artist himself?

Below, Hashimoto shares more thoughts about his work and the value of art in public spaces like libraries.

Art in libraries: ‘Part of the fabric of your everyday life’

In addition to appearing in art galleries, Hashimoto’s work has been commissioned for airports, colleges, office buildings (including the Willis Tower), and even a cruise ship.

Encountering art in public spaces can be a doorway, he says, from one’s everyday life into art museums and galleries.

“I think that the nice thing about public art is that you have this ability to reach these audiences that normally don’t go to museums or feel alienated by it,” he says.

As for his work at the library, he says: “I have a particular fondness for this piece being in this location because I think that it’s seen by people that wouldn’t normally be able to encounter one of these pieces in their day-to-day life.”

“It’s this thing that you visit at different stages of your life, and in an environment that’s about discovery,” he adds. “And I think that’s a really unique space to be in.”

“There aren’t a lot of vectors that make art easier for the general public,” he says. “Growing up with it in your your local library is really beneficial. Accepting that it’s part of the fabric of your everyday life is important. And not having it feel intimidating when you go the Art Institute of Chicago. You know, you look at all these paintings, and you already had a relationship with that, when you’re a kid checking out books.”

About the title: ‘Everybody always asks me about titles’

That tongue-twisting title: skip skitter start trip vault bounce – and other attempts at flight. What does it mean?

“Titles are funny, because everybody always asks me about titles. And for a long time, I didn’t title anything. And then slowly, I started making these longer and longer titles,” Hashimoto says, adding that his titles became more abstract as well.

The title isn’t meant to define the work, he says, “but to add an extra doorway into the work for people to access it in a thoughtful way.”

And to give viewers “a sense of movement through the piece, and playfulness that kind of levels the experience of seeing abstract artwork, where you can come to it, and approach it in a kind of childlike mind.”

In general, he says, the titles are an intellectual exercise, there for the viewers to ponder. Asking themselves, what does this mean to me? What do I think it meant to the artist?

“All of those questions that people ask,” he says. “I think asking the question is probably what the title is for.”

More about Jacob Hashimoto »
More about art in the library »