Need to confirm something you read on Facebook or heard about your library?

We are committed to sharing timely, accurate information (because as a library, that’s what we’re all about!). This page offers information in response to common questions and concerns. It is updated frequently to ensure everyone has access to consistent information on topics you are most curious about.

Need something fact-checked? Ask us now »

Libraries are for everyone

Equity and social justice are priorities for the library. TRUE »

Like all other agencies and organizations in the community, the library must identify and address how its policies, systems, programs, and services have been inequitable and have served to marginalize or oppress people, and then work to change them. Learn more about our anti-racism journey »

Your public library welcomes everyone, including those who are vulnerable, marginalized, or at-risk. We also connect people with the information and resources they need.

Our Public Safety Specialists prioritize people, respect, and dignity. They are trained to bring a trauma-informed care approach to conflict, and to help connect patrons with resources and social services.

Other public libraries that employ social workers include those in San Francisco, Denver, and Washington, DC. “Around the nation, public libraries have become de facto community health centers for people who don’t have access to other resources,” said our Social Services and Public Safety Director Robert Simmons. Read more on this trend from NPR »

The library's equity and anti-racism journey began with the hiring of a Director of Equity and Anti-Racism in fall 2021. FALSE »

The library has been on a journey to be a library for everyone for quite some time, including entering into a formal, board-approved contract with RGW Consulting in late 2019 to work toward becoming an anti-racism organization. See how this journey has evolved since 2013 under the library’s current leadership »

The library was closed for most of the pandemic. FALSE »

Remote, virtual, and new safe, contact-free services were consistently delivered throughout the pandemic because library staff continued working—whether remotely from home, or behind the scenes in closed-to-the-public spaces.

See this building status timeline and read our year in review for more specifics.

Increased use of digital libraries is both a local and national trend. In Oak Park, digital collection use more than doubled in 2020. And across the nation, increased use of library websites and apps grew in all income categories. 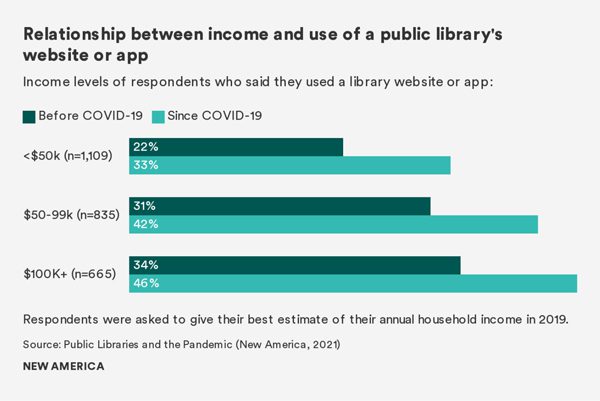 There was no plan to reopen Dole and Maze. FALSE »

When the pandemic forced the closure of all three library spaces on March 12, 2020, we knew Dole and Maze branches with their much smaller spaces and lower capacity limits would reopen after the Main Library. For one, it is very difficult to physically distance at 6 feet in these older buildings, ones that offer much cozier spaces for walking around, working, and gathering. Because of these limitations, we expanded home delivery and introduced resource delivery for local teachers. As pandemic conditions improved locally and restrictions lessened, we were able to safely reopen Maze Branch on April 19, 2021, and Dole Branch, the smallest of the three spaces, on July 5, 2021.

Curbside pickup was available during the pandemic. TRUE »

From June 15 to July 22, 2020, patrons had two options for contact-free materials pickup outside the Main Library: at the front door for walk-ups and in the Grove Avenue cul-de-sac for vehicles.

The underground parking garage was not a safe option for pickup for several reasons including materials location space, traffic flow, and outdoor air flow/ventilation.

Starting July 22, 2020, patrons were invited back into the Main Library to pick up their own holds, browse materials on all floors, and use computers by appointment.

Library workers were initially prioritized for the vaccine. FALSE »

When COVID-19 vaccines first became available, there was no formal federal, state, or local guidance regarding when public library workers would be vaccinated. In late March 2021, Illinois shared that public library employees could receive the COVID-19 vaccine in the government employee classification. Many Oak Park staff were then vaccinated through the Village of Oak Park Health Department in April and May. As of July 9, most library employees are fully vaccinated.

The library supports, organizes, and endorses all events on Scoville Park Plaza. FALSE »

The shared public space immediately outside the Main Library entrance is just that—public sidewalk space. While library-led programs may sometimes take place outdoors, anyone or any group may use or be in that area.

Solicitations outside the building are specifically addressed in the policy A Library for Everyone, Striving to Support Positive Experiences:

“Solicitations (support for political, charitable or other causes, not involving the solicitation of funds) outside of library spaces must follow Chapter 18 of the Village of Oak Park code; they are acceptable if they do not limit access to library entrances and exits, resources, and staff.”

The Park District of Oak Park controls formal use of Scoville Park, immediately east of the plaza sidewalk.

After the April 2021 election, there was a vacancy on the Board of Library Trustees. TRUE »

After the April 6, 2021, municipal election, there remained one vacant seat on the Board of Library Trustees.

Among four open seats, voters elected new trustee Madhurima Chakraborty and current trustees Matt Fruth and Sarah Glavin. Voters also elected candidate Saria Lofton, who had decided to drop out of the race before Election Day (but too late to have her name removed from the ballot).

At its May 25 regular board meeting, Board President Matt Fruth said the new board would decide on a process to fill the vacancy. The person appointed would then serve on the board until 2023 when a two-year term for that same seat will be on the ballot.

Following its May meeting, the library board began accepting applications for the open trustee seat via a brief online form available on the library website. By the June 15 deadline, 26 applications had been submitted. The two requirements to apply were age (at least 18 years old) and residency (live in Oak Park). Prior to the June 22 meeting, one applicant withdrew their name.

At June’s public virtual meeting, all 25 remaining applicants were invited to speak for up to five minutes about their interest in the position. After concluding regular business, the board entered a closed session for discussion. It returned to public session to vote unanimously to appoint Susanne Fairfax.

Watch the public meeting on the library’s YouTube channel »

The library increases its tax levy far above 3% every year. FALSE »

Following state law as a village library, the Oak Park library budget is submitted after library board approval as a levy resolution to the Village of Oak Park.

A 2.37% increase represents an average increase of $11 per tax bill.

In 2021, the total levy request for library services declined 8.6% due to the final debt payment for the bond issued by referendum for the new 104,000-square-foot public library erected in 2003. Data compiled from the Cook County Clerk’s Office and Cook County Treasurer’s Office.

The library is transparent about its finances. TRUE »

Each month, a financial narrative report accompanies disbursements, bank statements, and statements of income and expenses published on the library website at oppl.org/board (by year under the “Minutes and Agendas” section).

All board meetings are open to the public, recorded, and posted on the library’s website and YouTube page.

Audited financial statements from the year 2015 through 2020 also are available at oppl.org/budget.

Most of my library tax dollars pay for books. FALSE » 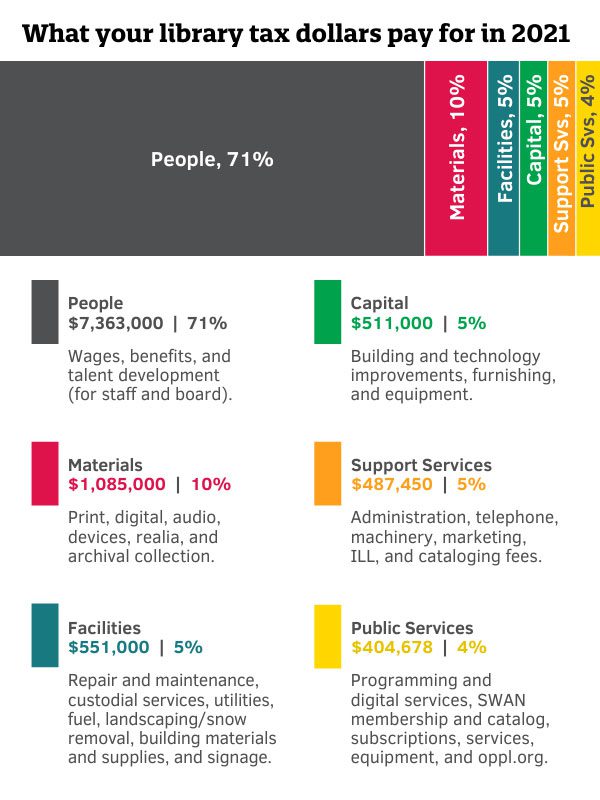 The library funds all services and resources with tax dollars. FALSE »

While it is true that nearly all (99.6%) of the library’s operating budget comes from property taxes, we are able to fund innovative projects and programs through grants and generous donations to our seven dedicated library funds.

For example, generous donations to the library’s Fallon Family Fund enabled us to launch Oak Park’s beloved Book Bike in 2015. And grant funding in 2020 allowed us to increase the number of WiFi hotspots and other devices we can lend to the community.

The Main Library keeps all the lights on at night. FALSE »

At the Main Library, we have steadily reduced energy usage by installing LED lightbulbs in the parking garage, lobby, and elevators. Overnight, we keep only about 20% of the building’s lights on—just enough so that our cleaning crew can work to make your experience the best it can be.

And in spring 2021, we made major lighting upgrades at the Main Library and Maze Branch, to reduce energy consumption and improve efficiency.

Learn more about the Main Library’s sustainable building design, including our green roof.